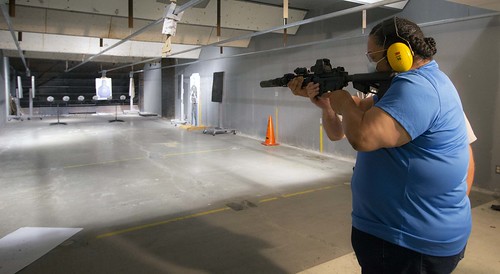 In August, Community Partnership Council (CPC) members joined in a special experience with UT Police designed to give participants an inside look into police operations. CPC members – a group formed to enhance and advance the relationship between UT Police and the community – got their first experience in police training in July when UT Police invited members to attend Suicide by Cop: Assessment and De-escalation. The full training typically is directed at law enforcement professionals.

Law enforcement widely uses the term, “Suicide By Cop,” to describe an incident in which a suicidal individual intentionally engages in life-threatening and criminal behavior with a lethal weapon, or what appears to be a lethal weapon, toward law enforcement officers or civilians. The intent is to provoke officers to shoot the suicidal individual in self-defense or to protect civilians.

“Unfortunately, about 10 to 30 percent of police officer-involved shootings turn out to be suicide by cop,” said UT Police Chief William Adcox. “It’s very important to recognize and understand the signs.” The assessment and de-escalation portion provided the CPC with a look into the de-escalation techniques that UT Police employs with its own security operations to prevent life-threatening results.

Diane Confer, director of Campus Services and CPC member, attended the Suicide by Cop training and said the presentation was “eye-opening”.

“I didn’t know the phrase [suicide by cop] existed and I wasn’t really 100 percent sure what it was before the presentation,” said Confer.

Sergeants Scott Barnwell and Isaac Graham and Officer Carlos Guzman guided the members during an on-site visit to the UT Police building, during which they expanded on the department’s de-escalation training and the weapon systems its officers employ in encounters with hostile individuals.

Guzman, a member of the System Rapid Response Team (SRRT) for UT System Police and a champion shooter, provided an overview of handguns and rifles, explained the weapons’ mechanics, and discussed the circumstances that make one weapon more suitable in certain situations.

“Not only was it extremely helpful to understand risks of every weapon, but also the benefits of every weapon, and how they're used to protect the campus,” said Maureen Lucarelli, clinical operations project director in the Clinical Operations Project Management Office at MD Anderson.

Altrivice Revis, chief operating officer director in the Office of Chief Operating Officer at MD Anderson and a CPC member, reflected on her experience during the CPC meeting.

“What struck me most and what I was really interested in is the science and thinking behind the Taser,” said Revis, recounting news stories about how one weapon was mistaken for another. “I wanted to understand the training behind that,” she said.

Adcox explained that officers often respond to calls for service involving people in crisis, which he says call for “a holistic approach in knowing how to de-escalate”. He stressed the importance of continuous immersive simulation training and de-escalation training for police officers.

Adcox added that all of UT Police’s eligible commissioned officers are Mental Health Officer certified through the Texas Commission on Law Enforcement and undergo extensive training throughout the year.