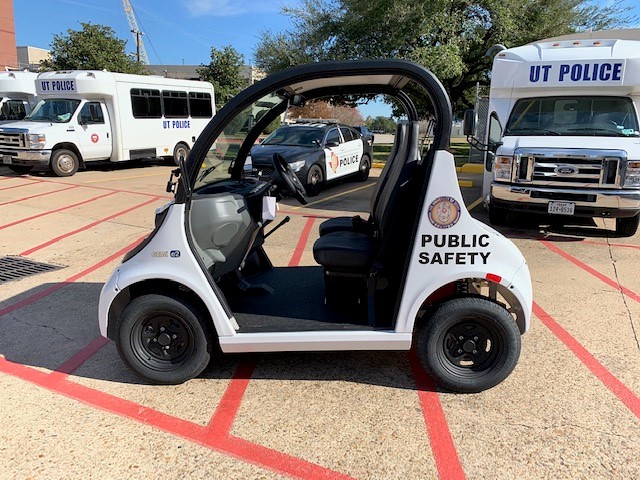 The future, some say, is in electric vehicles. The University of Texas Police at Houston (UT Police) has moved toward this future by acquiring three Polaris GEM e2 vehicles.

These low-speed electric vehicles (EVs), seat two people, look similar to golf carts and were selected for their suitability for patrolling off-road locations on campus, though they can be driven on city streets as well.

“The additions of the EV fleet are another step forward to meeting the need for increased patrol of MD Anderson and UTHealth parking garages, parking lots and ‘hot spot’ locations,” said Public Safety Manager Jason Lipe, who is overseeing the EV deployment.

Public safety officers, uniformed civilian personnel who assist the community with duties that include customer service and entrance monitoring, have been trained to drive the EVs and will be assigned to patrol MD Anderson and UTHealth building locations. The EVs augment a fleet of five electric bicycles acquired in 2016.

“By adding these EVs to our fleet, we are making sure people and their vehicles are safe,” Lipe said.

The EVs are being outfitted with special features and are marked clearly with “UT System Public Safety” and the UT Police emblem. They come equipped with a Flooded Electrolyte battery, have a 15 to 30 mile battery range, and charges using standard 110-volt outlets. Two EVs that will stay in the Texas Medical Center have designated charging spots at the UT Police building.

Abel Santillan, UT Police’s property and evidence manager, is managing the vehicle enhancements. He says he's working on small upgrades like adding spotlights and installing white and yellow light bars to the roof of the vehicles. These improvements, he said, will make public safety officers more visible and serve as deterrents for criminal opportunists.

UT Police has already placed one EV in service at the MD Anderson West Houston location, patrolling the perimeter of the building and throughout the parking lot and aiming to prevent crimes, especially vehicle crimes.

In the future, said Lipe, who supervises the public safety officers who serve at MD Anderson's Houston-area locations, UT Police will deploy this EV to other locations as needed.

When UT Police complete improvements on the other two EVs, they will service MD Anderson and UTHealth property within the TMC, providing security and personal safety transports for employees and patients after dark. The vehicles are slated to be deployed mid-February.