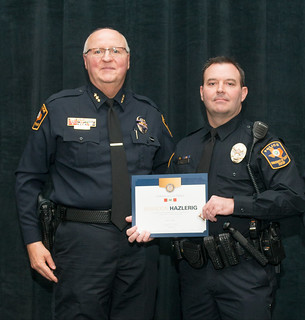 Officer Brandon Hazlerig was instrumental in apprehending a robbery suspect at a UT Housing parking garage. Hazlerig aided in setting up a perimeter surrounding the garage where the suspect had entered. After an hour-long search, Hazlerig found the suspect hiding in a stairwell. His use of verbal commands led the suspect to surrender. The suspect was subsequently turned over to the Houston Police Department.