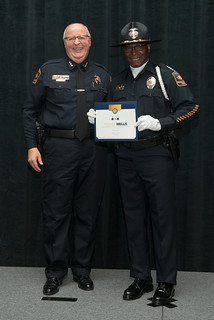 The life-saving actions of Detective Rodney Wells’, led to a man in distress surviving a medical emergency. While patrolling parking lots owned and operated by the Houston Astros last June, Detective Wells was flagged down for help by a contract security worker. The security worker had found a man lying face down, unconscious in the grass, and she had been unsuccessful in obtaining a response from the individual. On arrival, Wells instructed a security staff member to call 911 as he began CPR. He performed uninterrupted chest compressions, and the man became semi-alert by the time paramedics arrived on the scene. The man was transported to St. Joseph’s Hospital for further medical observation.