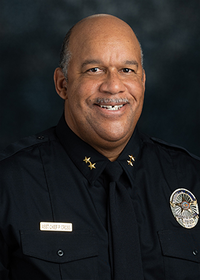 Paul Cross joined The University of Texas Police at Houston in 2018 as Assistant Chief over Uniformed Police Operations with 34 years of law enforcement experience.

Cross’s experience stems from 24 years of service with the El Paso Police Department (EPPD) where he retired in 2007 as Assistant Chief for the Office of Operations. During his career, he supervised over 80 homicide investigations, hundreds of sexual assault and robbery investigations, and served as the department's Emergency Management Coordinator for the city’s Emergency Operations Center. Beginning in 2009, Cross worked for the El Paso County Sheriff’s Office where he oversaw the Criminal Investigations Bureau and ran the Jail Annex as an Assistant Chief before retiring in 2018.

In 2005, Cross was awarded the “Adelante Con Ganas Award” from State Senator Eliot Shapleigh, and in 2006 was named EPPD’s Executive of the Year.

Cross earned his Master of Business Administration degree from the University of Phoenix and Bachelor of Arts degree in Communications from Central State University, Ohio. He also is a graduate of the FBI National Academy and has served as President of the National Academy’s Texas Chapter. Cross served on the Texas Human Trafficking Task Force for five years until 2014.

For the last 13 years, Cross has been an adjunct professor for The University of Texas at El Paso, Webster University and the University of Phoenix, teaching graduate and undergraduate courses in counterterrorism, homeland security and critical infrastructure protection.